«Plastic surgery is not only speciality. That’s the whole life. Nothing else counts. Every surgery is the individual story. As a surgeon you must approve your professionalism every day»

I graduated from the I.M.Sechenov Moscow Medical Institute in 1986, medical specialty, then qualified as a doctor (Diploma NV № 472402).

I started the career as a nurse at Sechenov 1st Surgical Hospital of Therapeutic Faculty, the reanimation department since 1983 till 1986. The hospital includes 600 beds.

After graduation, I continued study at the internship as a surgeon on the basis of the Central Medical Sanitary Unit (MSC) No. 83 of the USSR Main Directorate of the Ministry of Health in Obninsk.

I worked as a doctor at TsMSC No. 8 of the State Administration of the USSR Ministry of Health (Obninsk). in the trauma and orthopedic department from 1987 till 1990.

I studied in residency in traumatology and orthopedics on the basis of theN.N. Priorov Central Institute of Traumatology and Orthopedics at Moscow, Russia from 1990 till 1992. In this period, I began go in for reconstructive surgeries, where extensive injuries of the skin muscles, tendons, peripheral nerves were observed with developing a technique for growing full-thickness skin grafts to replace post-traumatic skin defects.

I joined the postgraduate program in N.N.Priorov school of CITO from 1994 till 1997. In 1997, I continued education in the development of recovery operations, with skin defects on the face, head, limbs and body. At this time, I defended his thesis on the topic: “Endoexpander plastic of extensive post-traumatic skin defects in children” under the guidelines of professor V.N. Merkulov.

I received patent (Number RF 2318205) for the method of forming Filatovsky skin stem on endoexpander.

After successfully defending the thesis, I was awarded the degree of Candidate of Medical Sciences.

Since 1996, I began working part-time in cooperation with the medical center “Lasstrada”, where I applied the technique of implanting gold threads to face and body first time in Russia.

In 1997 I developed a methodology for using the ozone-oxygen mixture in relation to aesthetic medicine to improve the condition of the skin of the face and body and started to apply it as the first surgeon in Russia. In cooperation with prof. Mironova Z.S., we developed a methodology for the use of ozone-oxygen mixture in orthopedics for the treatment of pathology of the cartilage tissue of the joints.

In 1998-2000, I taught a course of "Ozone Therapy" based on the State Central Institute for the Advancement of Physicians.

From 1997 to 2004 I worked as a doctor at the N.N.Priorova clinic of sports and ballet injuries developing techniques for arthroscopic reconstructive-restorative operations of the capsular-ligament apparatus of the damaged Joints. Head: Academician of RAS, prof. Mironov S.P.

Since 1998, I as one of the first surgeon in Russia who began to go in for minimally invasive interstitial endoscopic surgery of the face and body.

From 2004 to 2006, I worked at the Federal State Administration of the President of the Russian Federation as a doctor in the department of reconstructive plastic surgery.

Since 2007, the co-founder of Medplanta LLC, 49% shares (from 2011 - 36.5%), the main focus is the development and implementation of surgical resorbable rigid polymers based on polylactic acid for surgery (Reconstructive plastic, maxillary facial, orthopedics - traumatology).

From 2006 to 2013, I worked as the chief physician of the “Lasstrada” medical center, the main focus in reconstructive plastic and aesthetic surgery as well as trauma and orthopedics, arthroscopy.

From June 2013 to January 2017, I worked as a hospital head and Chief Plastic Surgeon at the Medical Research and Education Center of the M.V.Lomonosov Moscow State University.

From mid-2013 to June 2017: the founder and director of the Medical and Surgical Center "Osnova"

Since October 2017, General Manager of the Institute of Beauty on Arbat, Moscow, Russia. I am also working as plastic surgeon.

- blepharoplasty and reconstructive surgery on the eyelids

- consequences of injuries of the skin, muscles, tendons, peripheral nerves

I have been repeating internships with leading surgeons of the world during 20 years.

Since 1998, involved in endoscopic interstitial surgery

I have 68 printed scientific papers about the problems of reconstructive plastic surgery and sports medicine.

I am a participant and speaker at Russian and international symposiums.

I graduated from the I.M.Sechenov Moscow Medical Institute in 1986, medical specialty, then qualified as a doctor (Diploma NV № 472402).
I started the career as a nurse at Sechenov 1st Surgical Hospital of Therapeutic Faculty, the reanimation department since 1983 till 1986. The hospital includes 600 beds.
After graduation, I continued study at the internship as a surgeon on the basis of the Central Medical Sanitary Unit (MSC) No. 83 of the USSR Main Directorate of the Ministry of Health in Obninsk.

I worked as a doctor at TsMSC No. 8 of the State Administration of the USSR Ministry of Health (Obninsk). in the trauma and orthopedic department from 1987 till 1990.
I studied in residency in traumatology and orthopedics on the basis of theN.N. Priorov Central Institute of Traumatology and Orthopedics at Moscow, Russia from 1990 till 1992. In this period, I began go in for reconstructive surgeries, where extensive injuries of the skin muscles, tendons, peripheral nerves

were observed with developing a technique for growing full-thickness skin grafts to replace post-traumatic skin defects... 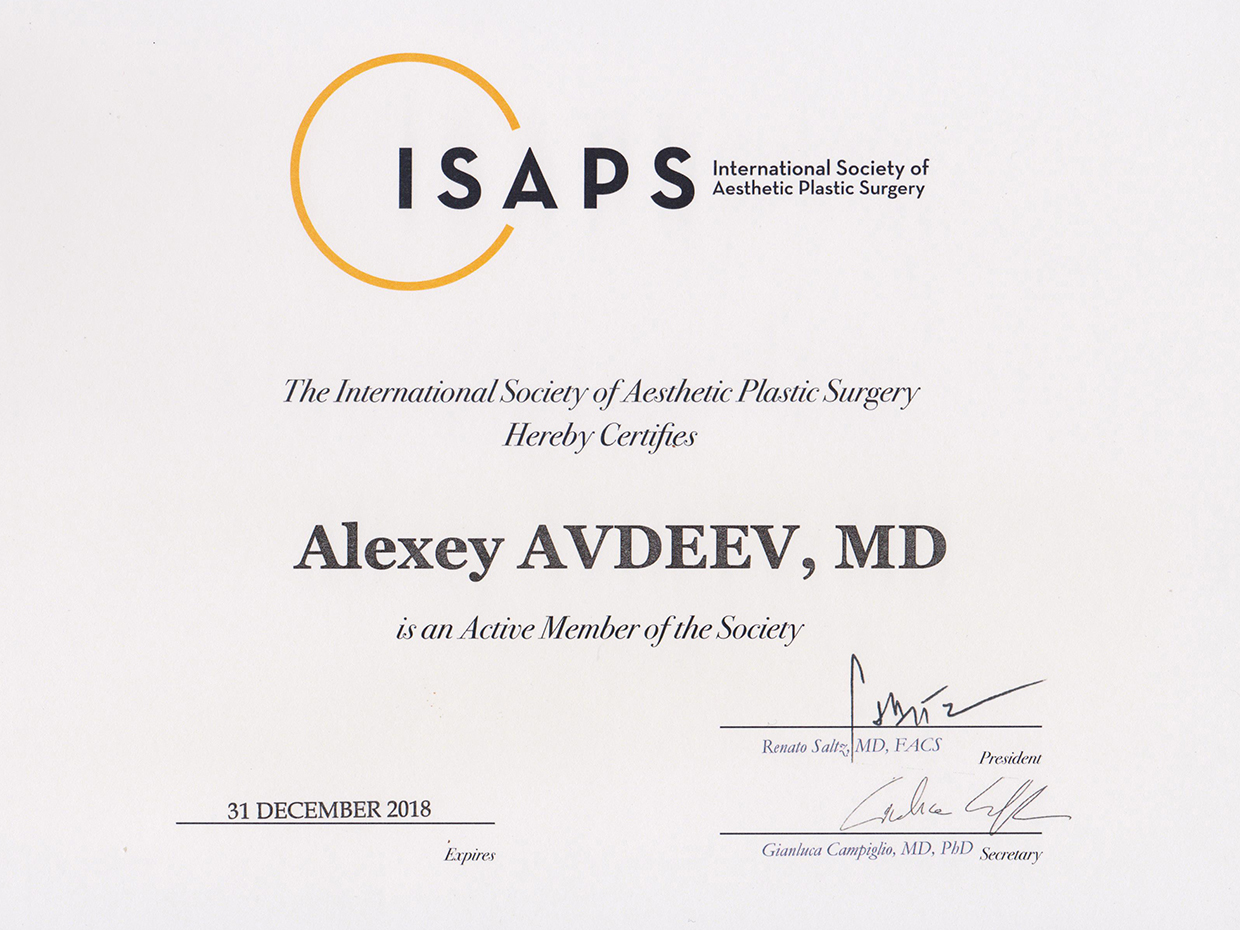 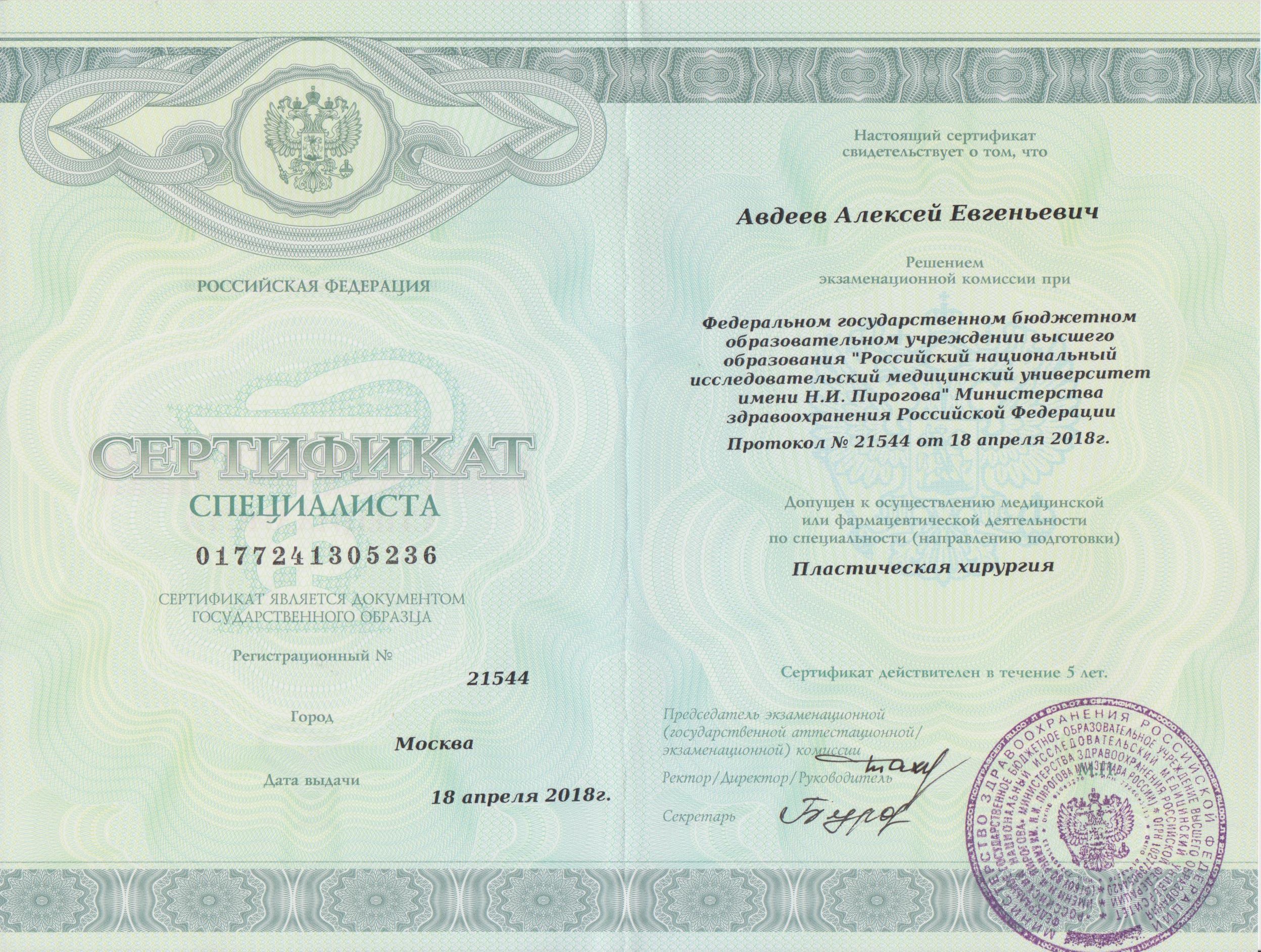 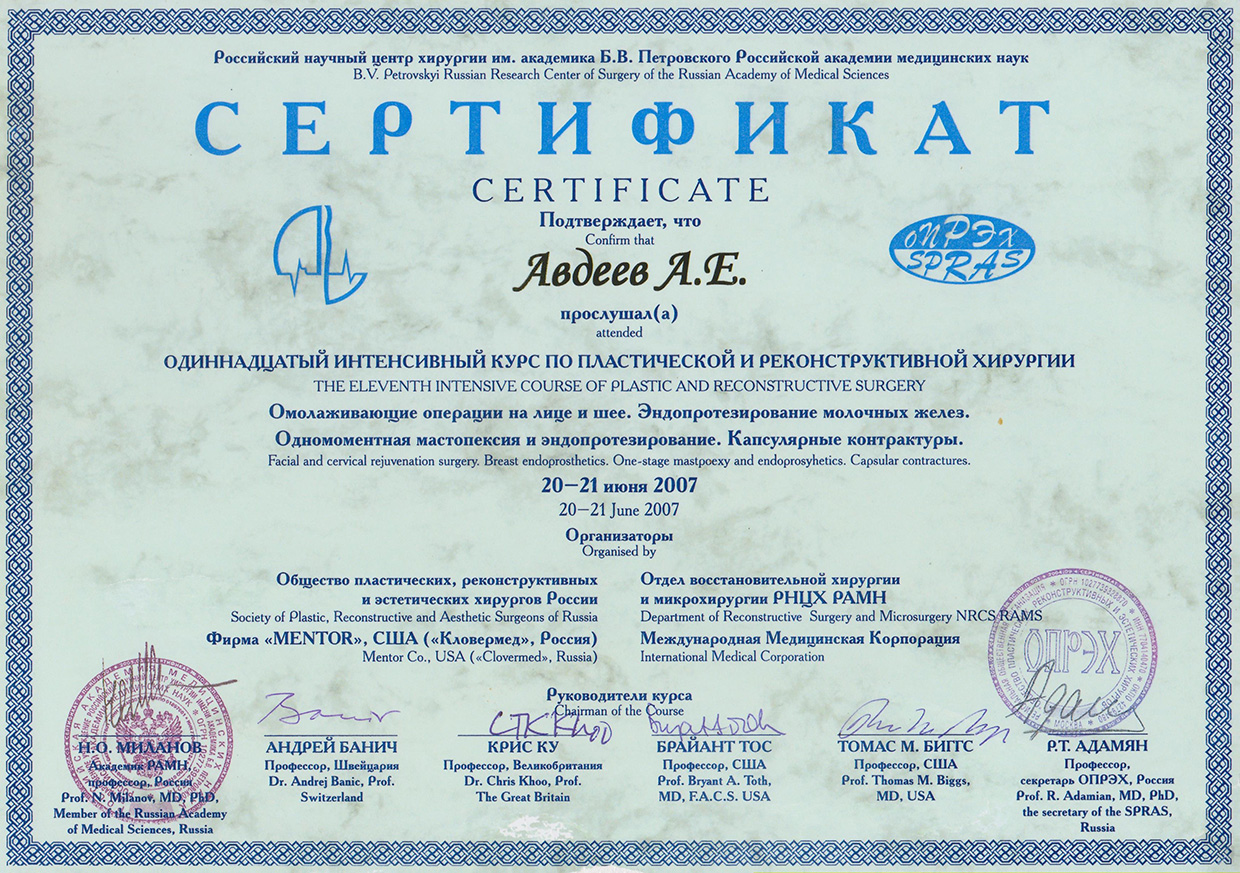 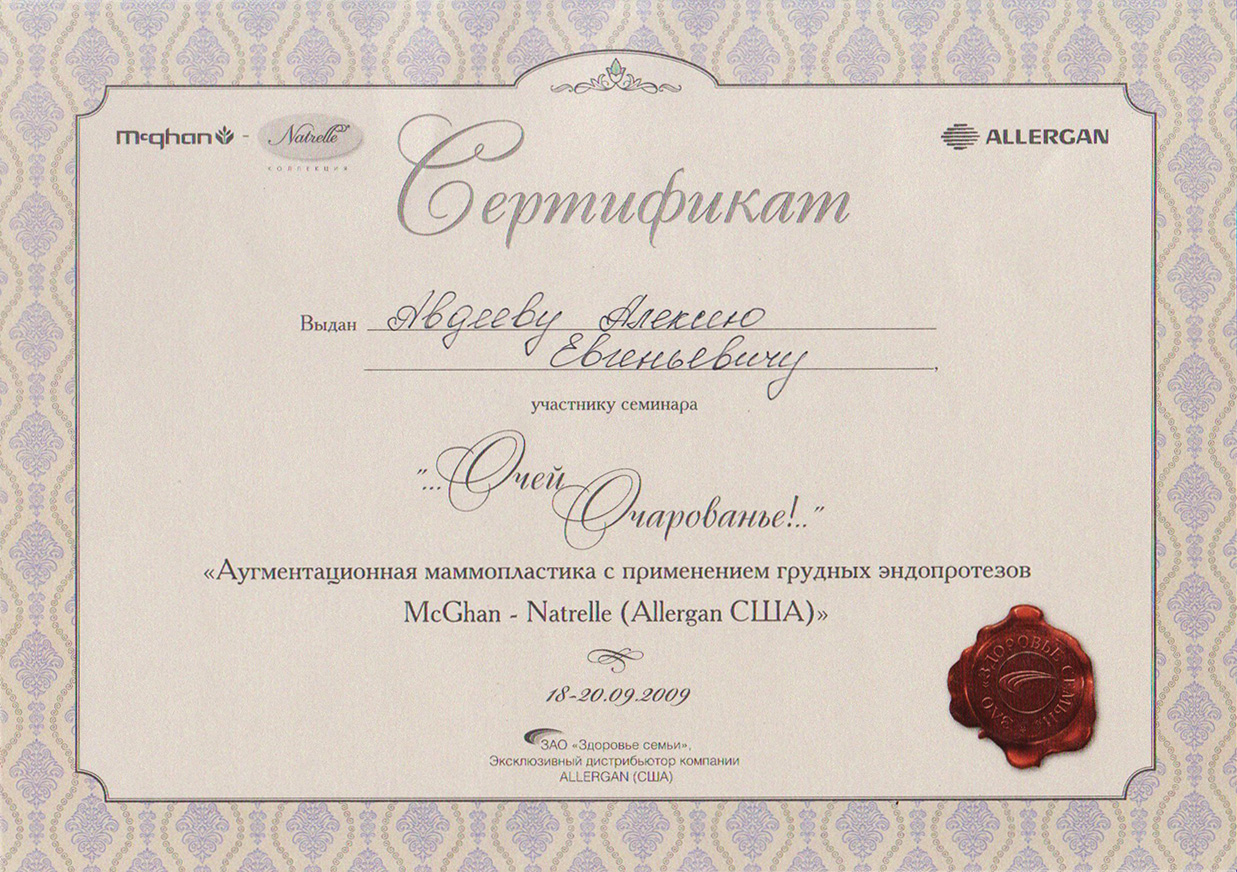 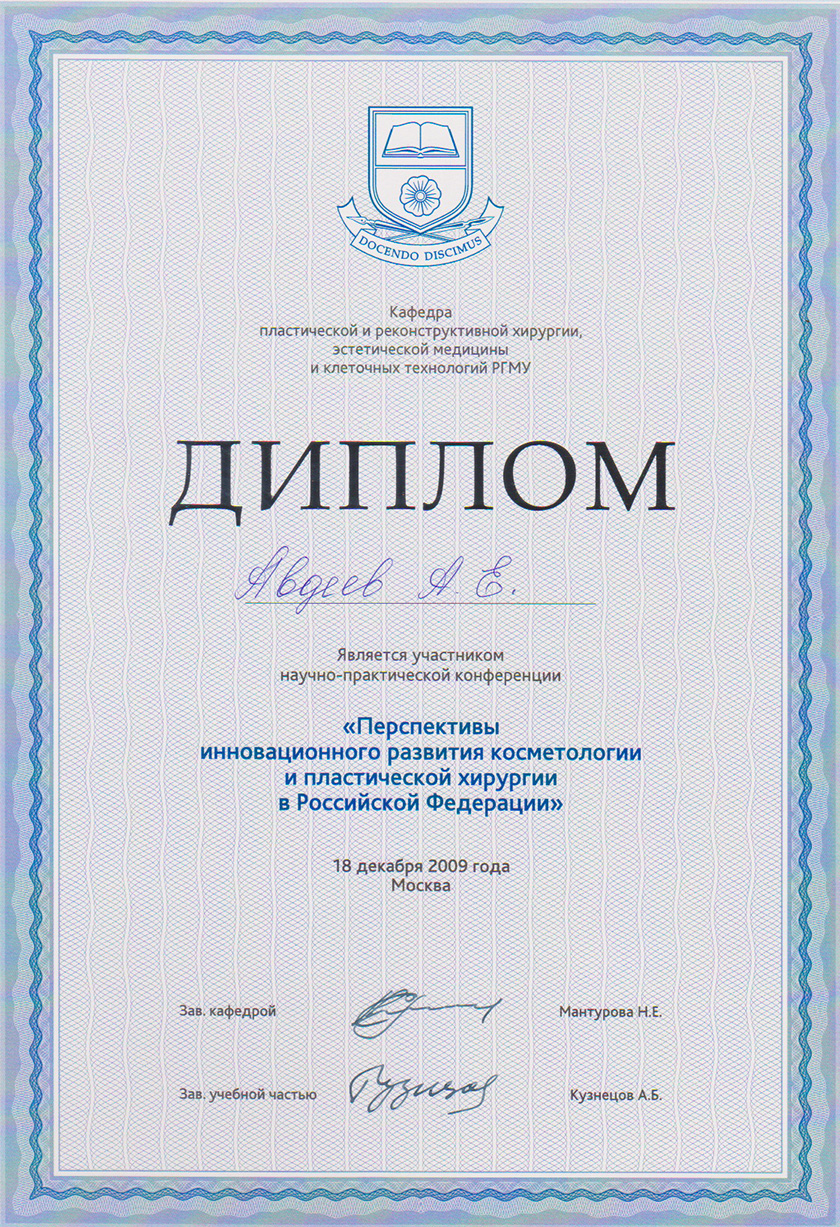 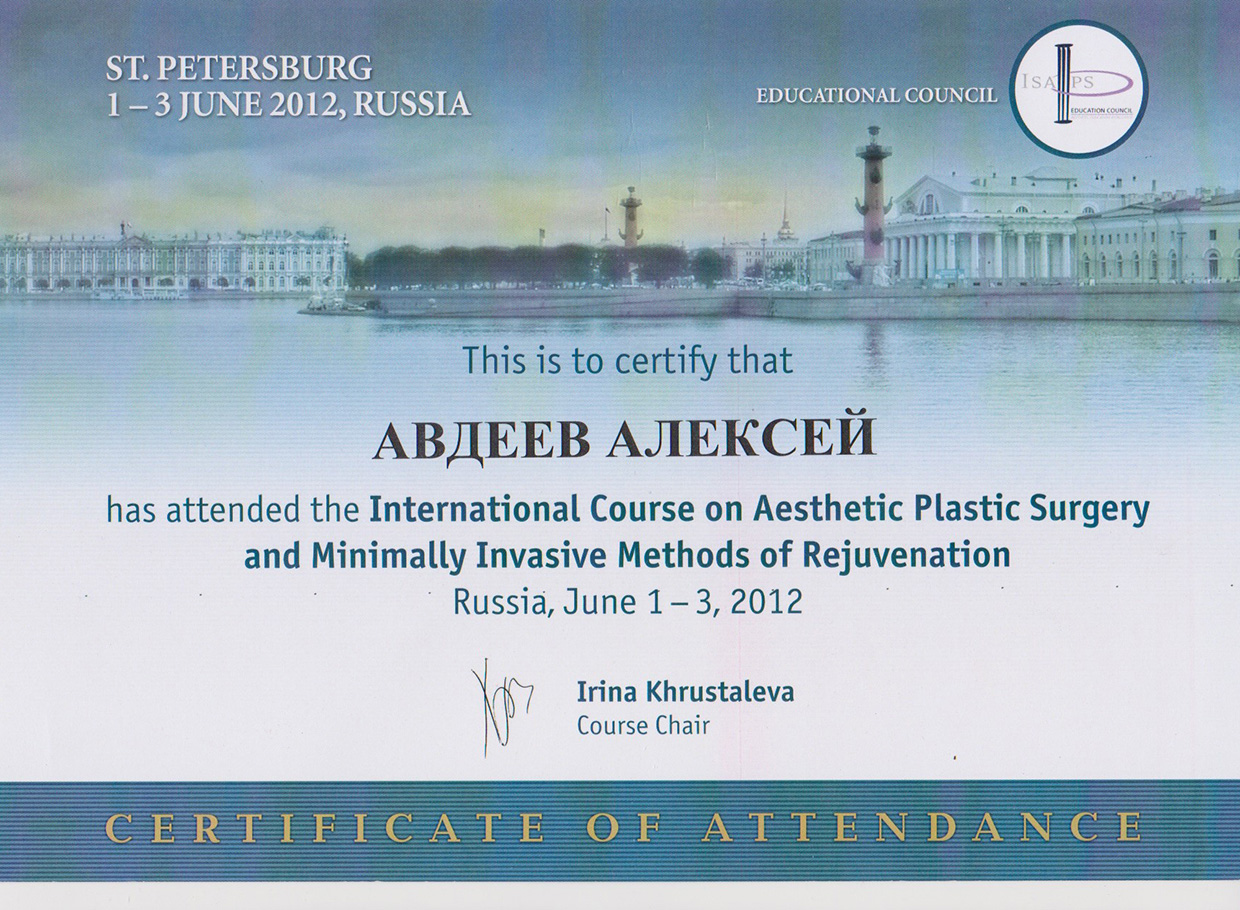 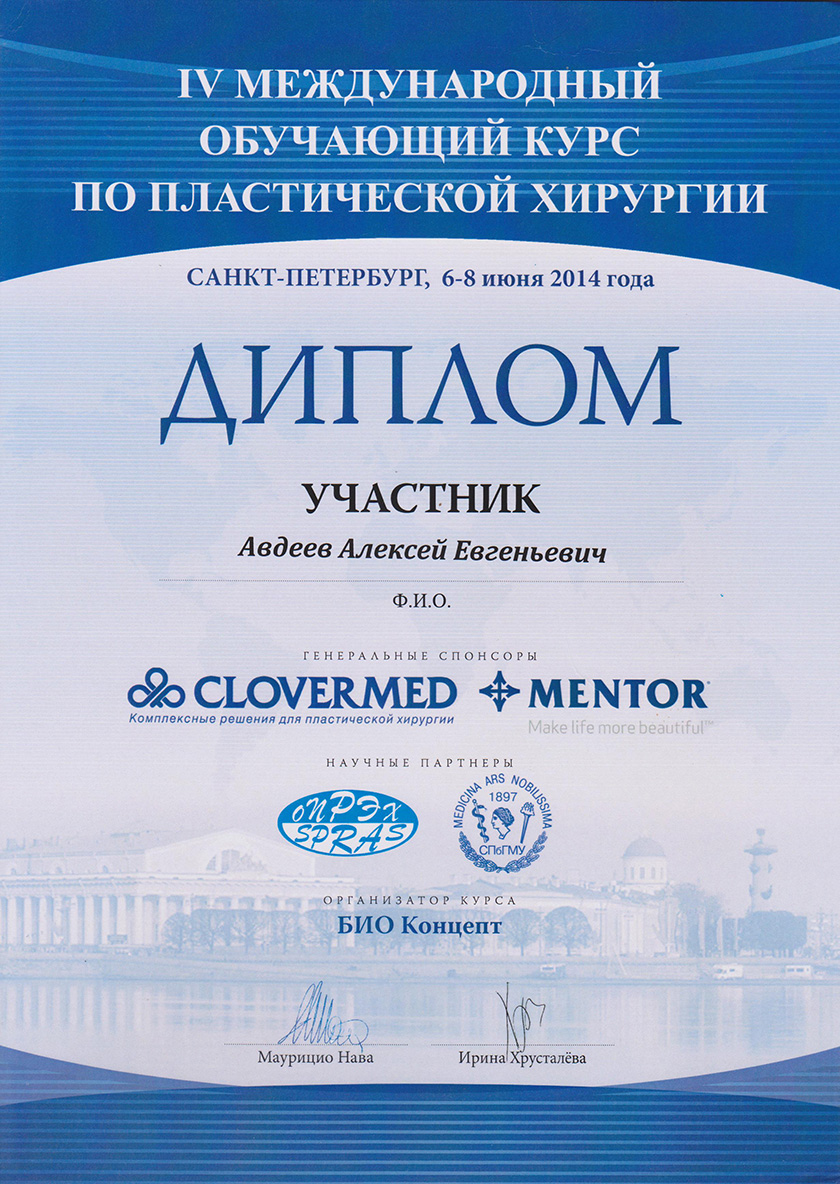 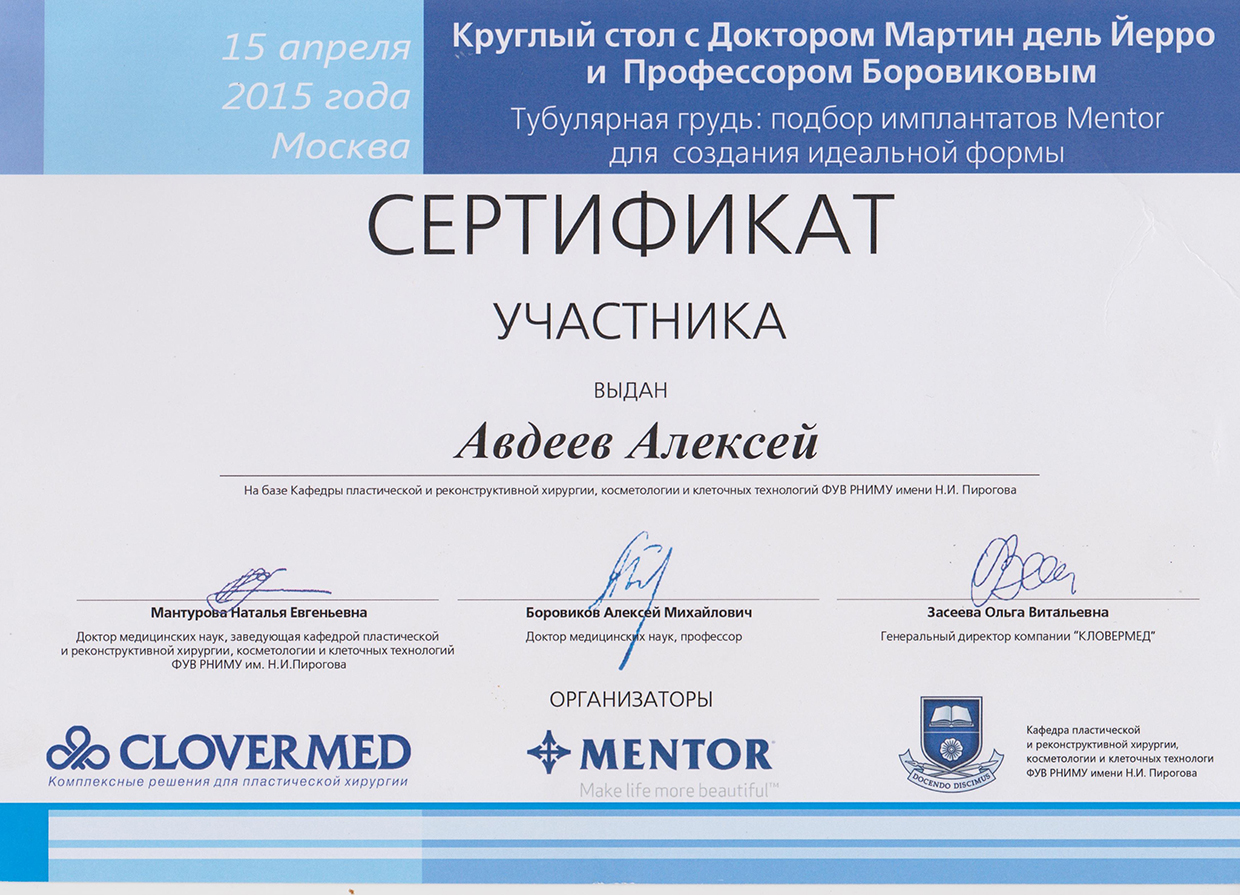 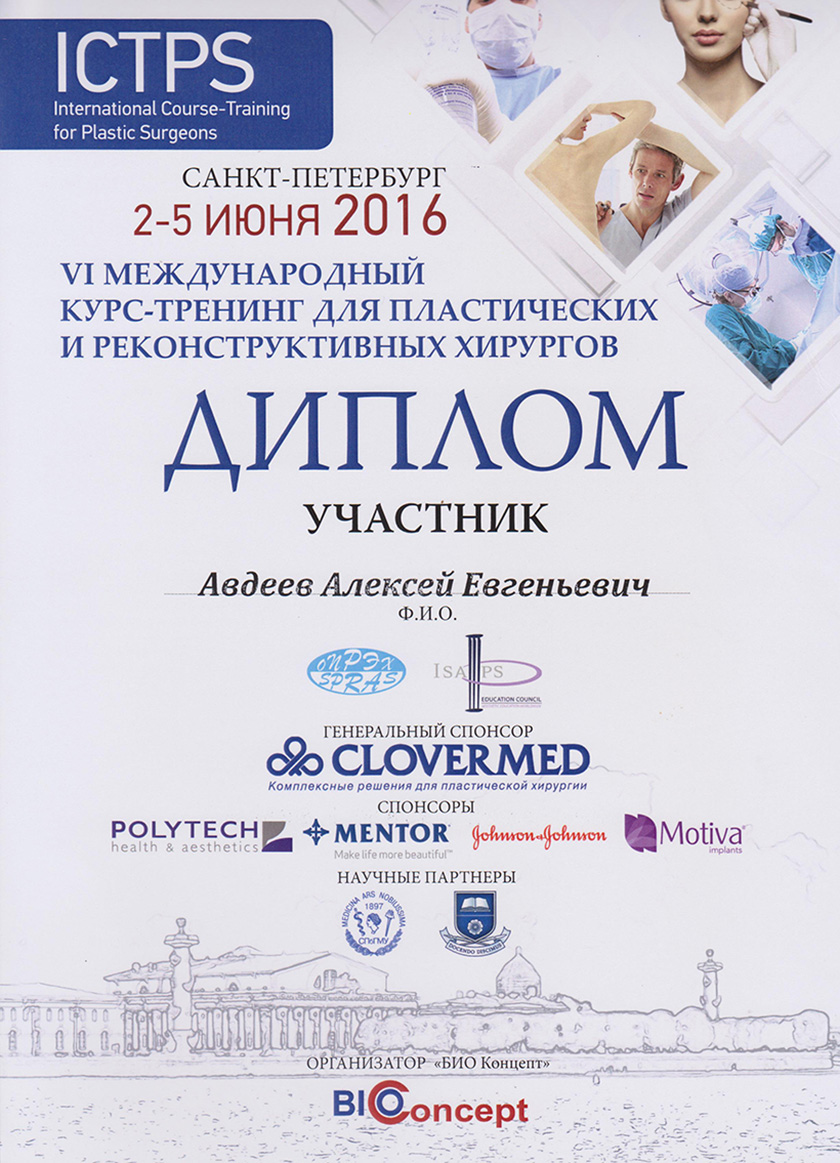 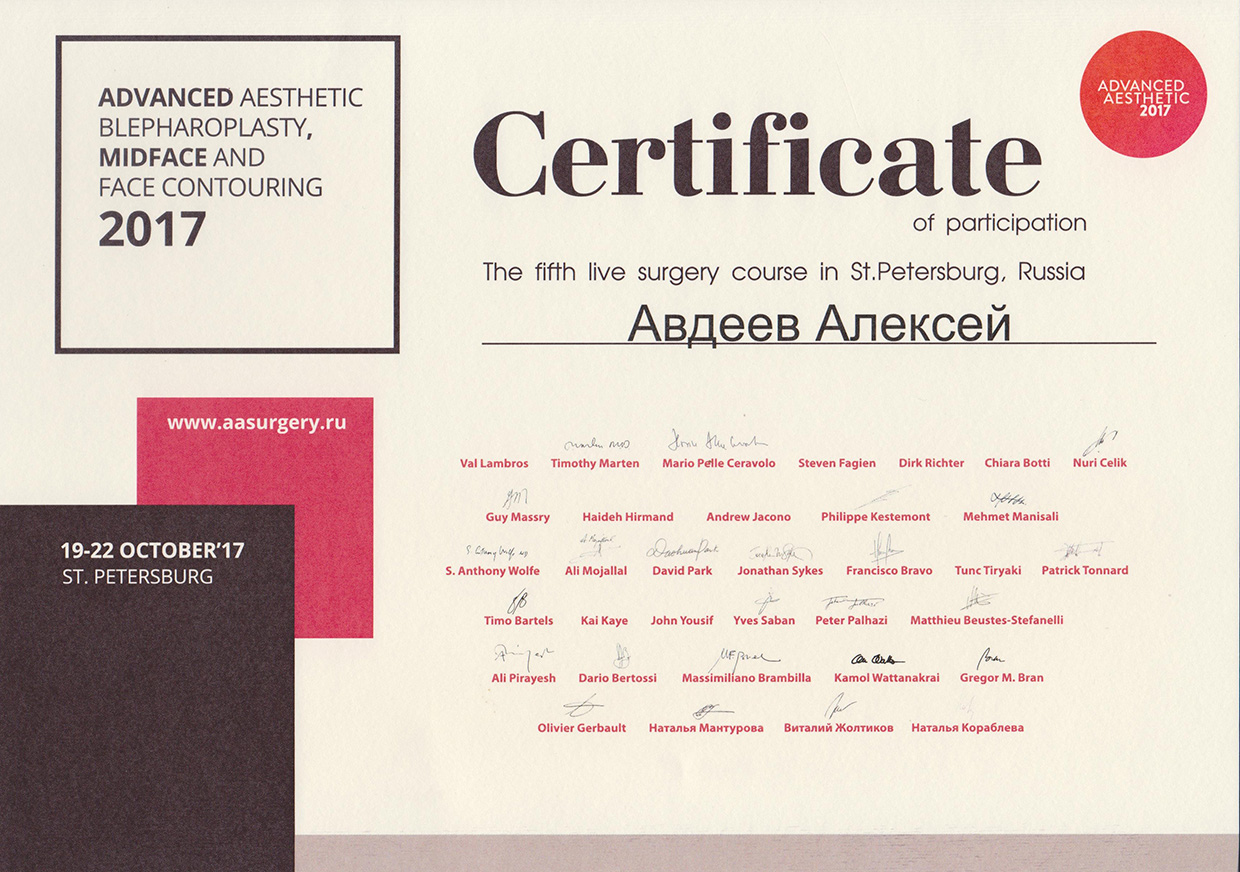 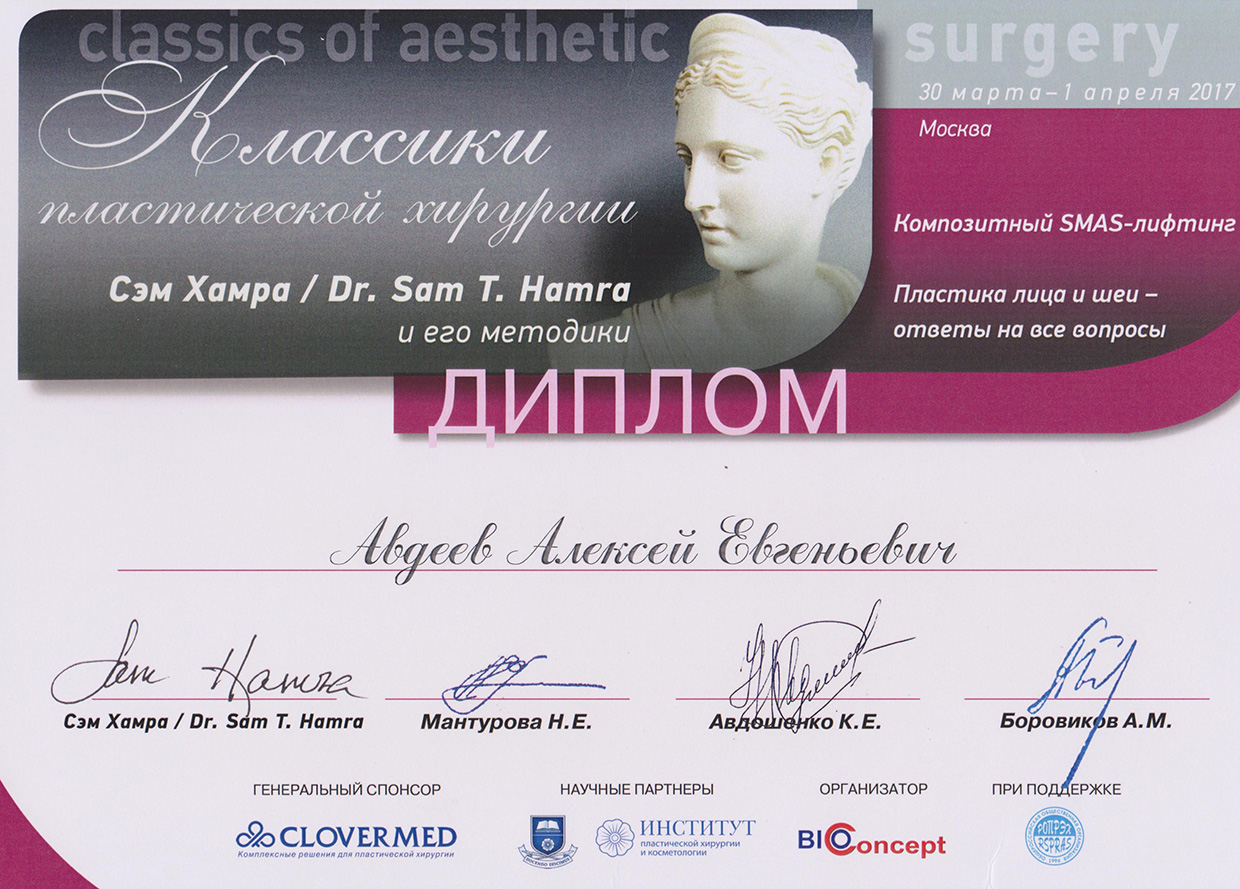 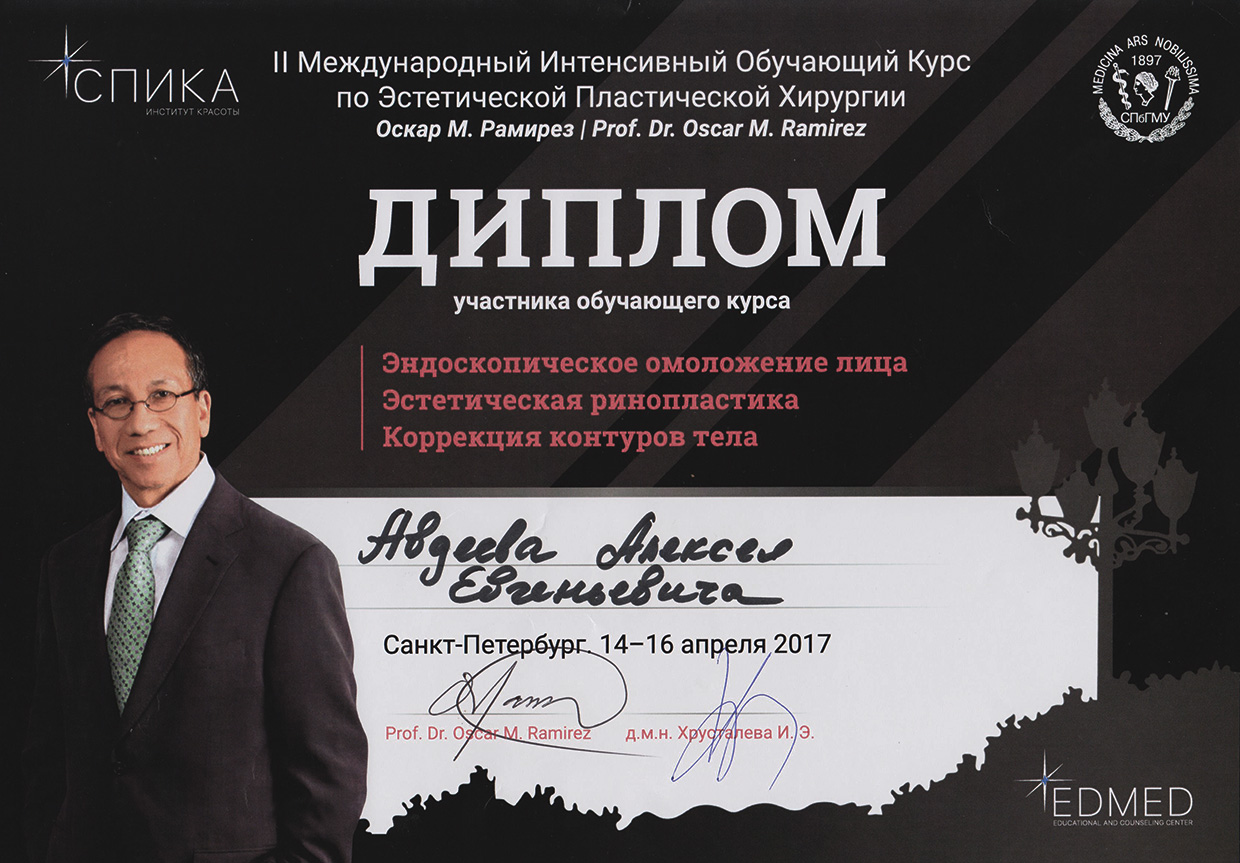 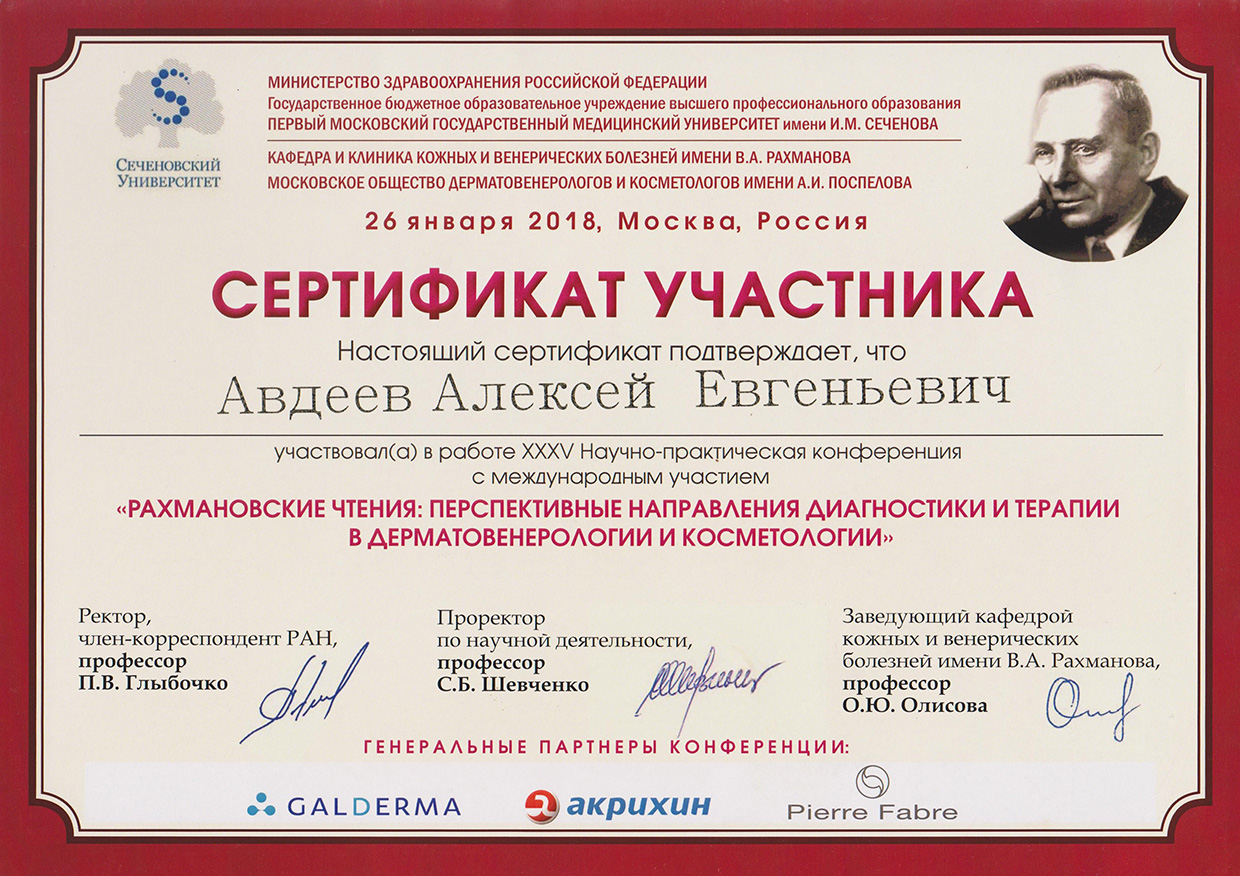 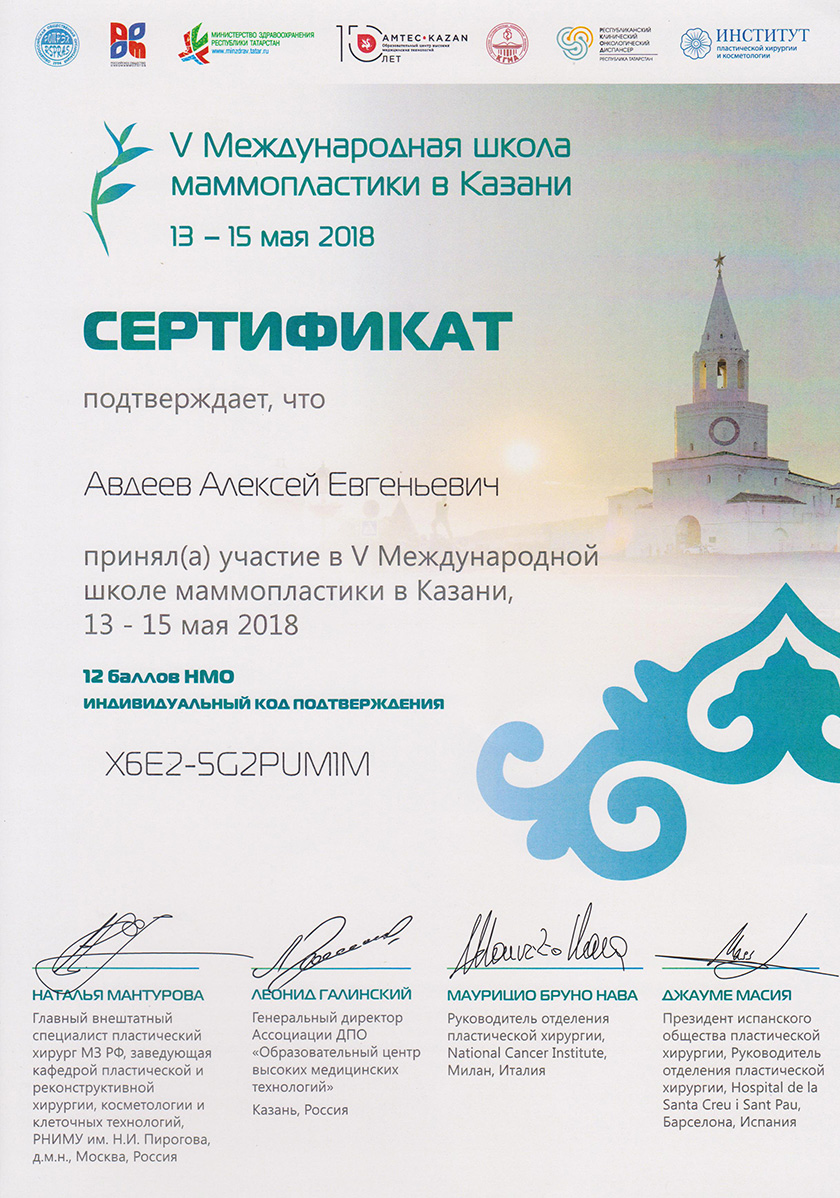 Surgery on face appeared at the beginning of twentieth century. Since then, many things have changed and improved. Face lift is developed to eliminate wrinkles, sagging skin, nasolabial folds and other signs of aging.

These types of face plastics are now available:

In the process of endoscopic plastic surgery of the face, instruments with a diameter of 4 mm or even less are used, which provide excellent illumination and magnification; thin cameras with 500 resolution levels; cold light source to avoid thermal damage for tissues with the ability to control the brightness of the light.

Opposite to traditional face plastic surgery, the operation is carried out with the special devices - endoscopes, which allow to carry out massive surgeries through small incisions to lift the face with minimal trauma to the surrounding tissues. Advantages of this techniques are that the cuts are in the scalp and will be covered with hair in the future.

Blepharoplasty is a type of surgery, that makes possible to remove excess skin and fatty tissue around the eyes, as well as reduces the signs of age-related changes.

Otoplasty is performed in cases of a violation of the anatomical structure of the auricle (lop-eared, etc.) and involves surgical intervention affecting the cartilage and soft tissues of the auricle.

Types of the otoplasty:

Abdominoplasty is an operation for restoring the aesthetic proportions of the abdomen. It allows you to remove excess skin and fat deposits, which were formed due to structural features of the body or because of stretching the skin after pregnancy or obesity.

Kinds of the Abdominoplasty:

Nowadays skin grafting is used for the plastics of cicatricial skin defects. Plastic scarring skin defects is a full-scale operation with excision of the scar and the replacement of the resulting defect with a skin graft.

Fractional photothermolysis is the technology of exposure to the skin of light energy, which creates a matrix of microscopic zones of thermal damage to the skin to a predetermined depth. Thermal damages activate the processes of tissue regeneration and create conditions for restoring the normal structure of the skin.

Mammoplasty - plastic surgery to change the shape or size of the breast. With asymmetry of the breast and with breast restoration after mastectomy implants are using.

Reduction of the labia minora

In the desire to turn to intimate surgery, in order to reduce the labia minora, as a rule, a physical disorder appears.

The surgery to restore the virginity

Hymenoplasty does not give any difficulties, it lasts only 15-20 minutes and does not require hospitalization. One of the methods involves stitching the scraps of chaff with special self-absorbing threads. The recovery period takes several days, and the hive itself is “restored” in two weeks.

The operation with the stitching technique has one main drawback - the fragility of the result.
Reconstruction of the new chaff (three-layer hymenoplasty)
The technique involves the creation of a new hymen with the use of mucosal tissues, borrowed from the entrance to the vagina. The result of hymenoplasty performed using this method is stored for two to three years.

Enlargement of the labia majora

For the enlargement of the labia majora, natural materials such as hyaluronic acid, own regenerative tissues or own fat tissues are used. During the procedure, they are inserted into the labia majora.

In case of enlargement of the labia majora with the help of its own fatty tissues, the fat is prepared in advance, liposuction is first done, and then it is processed.
In addition to improving the aesthetic side of this aspect, sensations increase during intercourse as a result of this procedure.

Reinforcement of the face and body with gold threads, secret lifting, sculptor

Modern researchers, during the excavations of the tombs of noble nobles of antiquity, found golden weeding on the facial bones, which did not belong to the outdoor decorations and was not part of them. The most reasonable explanation turned out to be only one: gold wire was introduced into soft tissues.
At present, gold thread reinforcement is used to preserve the exterior and the sooner you reinforce your face with gold, the longer a person will not be subject to age-related changes such as gravitational ptosis of the soft tissues of the face respectively.

Threads are creating a new frame of connective tissue, located perpendicular to the ligaments of the face, stabilizes the ligamentous apparatus, counteracting the omission of tissues. Along with the formation of connective tissue, blood flow is activated due to the sprouting of new blood vessels, which leads to better nutrition and hydration of the skin and, as a result, increased skin elasticity and turgor. Visually, the skin becomes "radiant"
Therefore, the more threads introduced per unit area, the more stable and durable the result.

Gold, used for implantation of the highest 99.99 test, does not contain impurities of other metals, is inert, does not enter into chemical oxidative processes with human tissues and does not cause allergic reactions respectively.

A unique innovative filler based on polylactic acid for those who want to return the youth and elasticity of the skin without surgery. The uniqueness of this product lies in the double action: the strongest stimulator of neocollagenesis (synthesis of its own collagen) and also it is a new generation of filler (wrinkle filler).

The sculptor is not just another wrinkle filler. It is the most effective product for eliminating wrinkles and rejuvenating the skin of all known to date, whose action is aimed at returning to the skin layers of structure and volume lost with age due to reduced regeneration functions.

The Sculptra removes cellulite, increases and models the shape of the buttocks.

Volumetric and contour modeling, which will give sensuality and seduction to the lips.

Applying of fillers, increases the volume, raises the corners of the lips.
The active ingredient acts safety and does not cause allergic reactions.